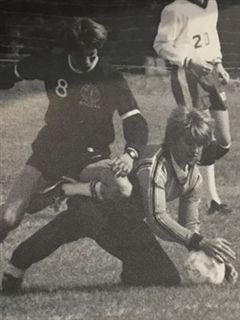 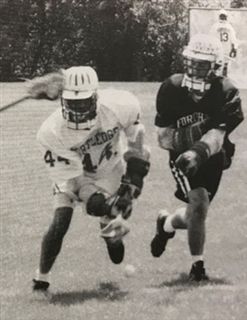 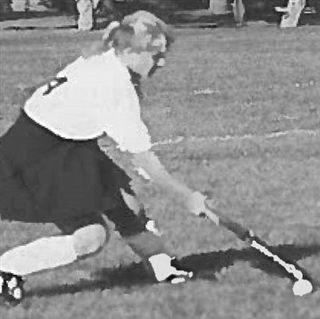 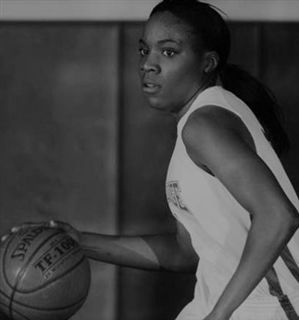 Nils Youngwall ’84
An incredibly well-rounded athlete, Nils Youngwall, lettered in Soccer, Ice Hockey and Lacrosse during all four years of Upper School, captained all three programs as both a Junior and Senior and was selected five times as a team MVP. Nils went on to attend Johns Hopkins University, where he played club hockey and walked on to the Varsity Men’s Lacrosse team which resulted in Nils being a member of the 1987 Blue Jays’ team that won the NCAA National Championship in Men’s Lacrosse. Even with all these athletic accomplishments, Nils has always been known as a quiet and humble person who leads by example and is always kind and supportive of teammates and friends. So it is with the support of those friends, as well as the support of all those who had the opportunity to watch Nils compete as a young athlete, that we recognize Nils Youngwall as a member of the Portledge Athletic Hall of Fame.

Chris Masotto ’94
Blessed with significant athletic ability, a tremendous work ethic, and excellent leadership skills, Chris Masotto was the face of Boys Athletics at Portledge in the early 90s. During his Upper School years, Chris received 11 Varsity Letters (four each in ice hockey and lacrosse, and another three in soccer) and served as captain of all three sports during his senior year. Chris’ athletic talents were obvious as he was selected All-League in both soccer and lacrosse during his sophomore, junior and senior seasons, and as a United States Lacrosse Association All American as a senior. Chris went on to graduate from Hamilton College where he played four years of Varsity Men’s Lacrosse, once again serving as a captain for both the ’97 & ’98 Continental squads. Chris’ athletic career was marked by a high degree of sportsmanship as he competed with a determined but calm demeanor and always treated his teammates, coaches, and opponents with great respect. Chris was recognized as the recipient of the Portledge Bowl at the 1994 graduation ceremonies and it is now fitting that he be recognized as a member of the school’s Athletic Hall of Fame.

Willa Sky-Bacon Freer was an athlete who Kelly Gottesman had the pleasure of knowing and coaching through Middle School and High School in both Field Hockey and Lacrosse. Seeing a student-athlete like Willa grow in so many ways, skills, confidence, and leadership to name a few, was an absolute pleasure to experience. Willa always worked hard on her individual skills and teamwork. She had the drive to always improve on her skills and was never afraid to try new things. Willa was always upbeat and brought a positive, upbeat attitude to every practice and game. Willa truly enjoyed playing the sports she did, which only made her that much better. She was a dedicated athlete and a supportive teammate. The committee is excited to celebrate Willa and all of her accomplishments and thanks Willa for being a role model for future Portlege student-athletes.

Tamara Simpson ’14
While she participated off and on as a member of Coach Corby’s Varsity Girls Tennis dynasty, Tamara Simpson’s athletic career at Portledge predominantly concerned basketball – and what a career it was. Tamara was the best player on a very good Varsity Girls Basketball team during all three of her years at Portledge. She was team and league MVP sophomore, junior and senior seasons, a McDonald’s All American nominee as a senior, and received the Portledge Senior Athletic Award in 2014. Tamara went on to star as an NCAA Varsity Women’s Basketball player at Yale University with a long list of school and Ivy League accomplishments including Ivy League Defensive Player of the year in 2016-17 and becoming Yale’s career leader in steals, a record she set in only her junior year. While all of these individual accolades are certainly incredible, what really defined Tamara as a player is the success she led the Portledge Varsity Girls team to during her years as a Lady Panther. Portledge was a three-time league champion during Tamara’s career and the squad went on to participate in the NYSAIS State Championship Tournament at the close of each of those seasons. In 2013 Portledge was seeded 2nd and reached the semi-finals – this marks the farthest Portledge Varsity Girls Basketball has progressed at the state level in the school’s history. There have been many outstanding girls basketball players at Portledge, as there are now, and the team is usually very competitive, but Tamara took Portledge Basketball to another level and did so with dignity, eloquence, determination and tremendous leadership. Thus, we recognize this amazing student-athlete as a member of the Portledge Athletic Hall of Fame.

Paul Sclafani ‘86
Sclafani was a leader and role model for so many young men at Portledge. He was the captain of nine different teams throughout his career, as he showed an innate ability to lead others and make those around him better. He was extremely unselfish, classy, and a great motivator. Sclafani was the first ever Boys Lacrosse All - American at Portledge. He held the school scoring record for 16 years. He was the Varsity Boys Lacrosse MVP all four years in high school. In hockey, he was the MVP of the Princeton Day School Tournament in 1985 and the MVP of the team his senior year. He was also a standout goalie on the soccer team saving many big penalty kicks throughout his time in net. Sclafani showed those around him how to compete with class and humility through both victories and defeat.

Emily Edwards-Bourdrez ‘07
As part of the Class of ‘07, Emily Edwards-Bourdrez was a relentless defender and rebounder on the basketball court. Known as a fantastic athlete who could dribble end to end and finish, she was a four-year starter for the Girls Varsity Basketball team, Edwards-Bourdrez was also captain for three years in a row, and league MVP twice, scoring over 1,500 career points and notching a career-high 38-point game. A leader both on and off the court, she was a pleasure to coach and well-respected by all that played with her, coached her, or watched her play. While Varsity Girls Basketball was always an important program at Portledge, Edwards-Bourdrez elevated the game to a whole new level. People started coming to games just to see her play, her name began appearing in Newsday which brought the Portledge Girls Basketball program recognition, recruiting picked up, and soon championships were being won. Edwards-Bourdrez was also a big part of building the Varsity Girls Soccer program as she was a four-year starter and the goalie on the first squad to make it to the PSAA playoffs (part of the famous girls soccer Class of ’07 which had an award created after them). In addition, Edwards-Bourdrez started as a defender on the Varsity Girls Lacrosse team. In her senior year, the lacrosse team advanced to the NYSAIS Quarterfinals. Her senior year she earned the Senior Athletic Award. Edwards-Bourdrez continued her athletic career at Tufts University playing NCAA Div III Women’s Basketball.
Siena Falino ‘09
Know for her incredible elegance, power, and speed on the ice, Siena Falino was a member of the original six players in 2003-04 to start the Girls Hockey program at Portledge School. Falino once scored seven goals in a victory over Lawrenceville, a Portledge record. She captained the only Varsity Girls Hockey team to win the WIHLMA Championship. Although hockey was her main sport, one in which she would go on to play at the Division I level, Siena was almost as dominant in lacrosse as she led the Varsity Girls Lacrosse team to three consecutive NYSAISAA tournament berths, and was an IPPSAL All-League player on Championship tennis teams (2006 & 2008). Her senior year she earned the Senior Athletic Award. Falino continued her athletic career at Northeastern University playing NCAA Division I Women’s Hockey.


Aaron Lee ‘09
As part of the Class of ‘09, Lee was known as a gritty & determined midfielder who played Varsity Boys Lacrosse for five years. Dominant on faceoffs with a great two-way game that eventually earned him recognition as Portledge School’s sixth All American Lacrosse Player, Lee was also a terrific defensive midfielder in soccer and a hard-nosed point guard in basketball. His senior year he earned the Senior Athletic Award. Lee continued his athletic career at United States Military Academy at West Point playing Men’s Lacrosse.
Addie Reilly ‘10
Reilly ‘10 was a three-sport athlete who captained the 2010 Varsity Girls Lacrosse team that won the NYSAISAA Championship, the only Portledge team to win an NYSAISAA Championship. She played on the Varsity Girls Lacrosse teams that competed in four straight NYSAISAA Championship Tournaments and graduated as the All-Time leading scorer in Portledge Varsity Girls Lacrosse history. Her senior year she scored a NYS Record 132 goals. Reilly was the MVP of the first Portledge Varsity Girls Soccer team to win the PSAA Championship (2009) and was a key member of the only Portledge Varsity Girls Hockey team to win the WIHLMA Championship. Her senior year she earned the Senior Athletic Award. Reilly continued her post-Portledge athletic career playing Division I lacrosse at Fairfield University.